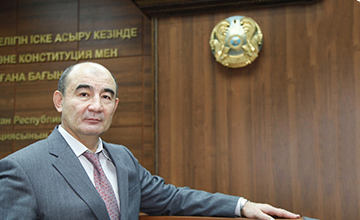 In 1980 he graduated with honors from Karaganda high school (KHS) of Ministry of Internal Affairs of the USSR, in 1983 – Early postgraduate of Kiev HS of MIA of USSR named after Dzerzhinsky.

Holds the rank of colonel of justice, tax, financial police.

PhD thesis defended in 1982 and in 1997 defended doctorate thesis dedicated to improving the effectiveness of criminal investigation, crime prevention, activities of prosecutorial supervision of the judiciary.

Master’s thesis subject: “Legal and organizational issues of crime prevention in the preliminary investigation (According to the materials of investigative apparatus of Ministry of Internal Affairs of the Kazakh SSR)” (Kiev, 1982).

In 1997 and 1999 – Senior inspector for especially important cases of the Secretariat, Deputy Director – Head of the Investigation Department of the Tax Police Department og MoF RK; Acting Vice-Chairman of the Tax Police MoF RK (1998); Senior Inspector for particularly important cases of the Public Relations Center – Head of the Advisory Group of Chairman of Tax Police MoF RK.

He was the first head of the Academy of tax, financial police (1999-2001) that according to the decision of the Heads of Government, along with the Academy of Economic Security MIA of Russia is defined as a basic institution for training and qulaification improvement of staff of financial (tax) investigation bodies of the CIS countries. At the same time, in 1999 and 2001 – Deputy Chairman of the Tax Police MIA RK.

From March to September 2007 – Chief Inspector of the Secretariat of the Security Council of the Presidential Administration of RK.

From September 2007 – Chief Researcher of the Institute of Legislation of the Ministry of Justice and the Prosecutor General Institute.

From May 2009 to July 2012 he was Principal of the Kazakh State Law University. From September 1, 2012 he was appointed as Director of the Institute of criminal procedure and anti-corruption investigations KAZGUU University.

He participated in legislative and expert work. Under his leadership, the first law “On the bodies of preliminary investigation and the status of the investigator” was prepared in the CIS and the Republic of Kazakhstan.

Attended a course on combating tax crimes (District of Columbia, Washington DC, USA. 2001), a course on the prevention of nuclear terrorism (Richland, Washington, USA. 2002), on issues of fight against terrorist financing and money laundering (Almaty. 2004). In 2005. studied in the U.S. jury activity Maryland, Virginia, the District of Columbia, as well as in Italy experience of law enforcement agencies and courts in the fight against the Mafia (Palermo and Corleone, Sicily island).

Field of research: problems of investigative crime prevention, the role of the criminal process in the fight against crime. Prepared 1 doctor and 8 candidates of Juridical science.

Member of the Editorial Board of the journal “Law and time” Attorney General, “Nakazanie” CCES MJ.

Thank-you letters from the President of Kazakhstan, Chairman of the Majilis, the Human Rights Commissioner of Kazakhstan.